The objective of this article is to compare different hydrogen storage technologies by specifying in particular the LOHC technology.

Constantly growing energy needs imply development of new power plant capacities. In 2019, global electricity domestic consumption exceeded 24 000 TWh[1] compared to 11 000 TWh ten years before. Climatic context leads us to develop new energy production facilities that do not harm the environment. But solar and wind intermittency imply a new constraint on immediate electricity consumption or storage for later use. Quantity of stored electricity compared to direct consumption is low: 800 GWh[2] in 2019. Large scale electricity storage solutions lack to face this growing renewable energy fluctuation. Several solutions already exist. Pumped hydraulic storage is the most widespread to store electricity (98%). Other means tend to develop, including battery storage or "Power-to-Gas-to-Power". P2G2P consists of using a temporary storage in a gaseous form of the electricity in order to release it later in the electrical form. Hydrogen is more and more considered as a promising vector for storing electrical energy.

You certainly did not miss recent hydrogen activity: hydrogen vector is strongly considered as a way to decarbonize a significant part of tomorrow usages. Several countries integrated it in their development plan. For instance, Australia, whose "H2 under 2" objective aims to produce a kg of green hydrogen below 2$[3]. Despite the CO2 content of current hydrogen production processes, trend is to develop clean hydrogen, that is to say hydrogen whom production does not emit harmful particles and comes from a renewable source. Idea is to develop massively such production within next years. If you were wondering why 98% of current hydrogen production is still CO2 emitter, major reason is economic. Producing 1kg of the renewable molecule costs between 5 and 30€[4] (15 to 90 c€/kWh), which is up to 19 times more expensive than the industrial molecule. Like photovoltaic industry a few years ago, "giga factories" of electrolysers are developing and will contribute to lower production costs. However, the logistics involved in hydrogen should not be overlooked, as it is not necessarily consumed where it is produced. We must enable the storage of large hydrogen quantities and transport them in an efficient way. As you will understand, large-scale storage will play a fundamental role in the hydrogen economy of tomorrow.

How is hydrogen stored?

Hydrogen is mostly stored in a tank either in liquid or gaseous form. It is also possible to integrate the molecule into materials through so-called absorption or adsorption processes. The choice of a storage system will therefore depend on logistical parameters (e.g., quantity, duration and methods of transport) and economic criteria. Anyway, transporting such gas is expensive. To be economically meaningful, it is essential to increase the storage density of the gas. How can we compare hydrogen storage technologies and determine the most relevant versus logistics and economics parameters?

What are the hydrogen transport options?

Table 1 - Advantages and disadvantages of hydrogen storage and transport options

LHC principle is using a reversible chemical conversion process allowing to store hydrogen in a different chemical state from molecular hydrogen: the hydrogen is linked with a liquid.

Process is made of two steps: 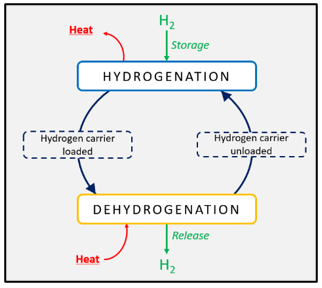 HYDROGENIOUS and H2 Industries players are using the liquid carrier DBT (Dibenzyl Toluene) which the advantage is currently being widely used as a heat transfer fluid and being commercialised on average at 5€ per kg[9]. DBT has the following benefits: there is no explosion nor flammability risk. The molecule toxicity is low compared to diesel or gasoline and its liquid state at ambient temperature allows to target mobility applications – no need to undertake constraining processes. However, liquid organic carriers tend to degrade over time with carbon emissions. Silicon-based carriers containing no carbon recently went off. The French start-up HySiLabs positioned on this field, uses a silicon-based carrier called “HydroSil”.

Hydrogenious[10] estimated that one truck trailer can load up to:

Carried out under ambient conditions, LOHC transportation technology seems relatively not constraining. Large-scale hydrogen quantities can be safely transported and in a flexible way. Trains and supertanker boats are being considered to transport several tonnes of hydrogen in the future.

What status for LOHC technology?

However promising, LOHC projects are still very rare and at demonstration phasis. Following costs are likely to limit its expansion for now: unloading process require energy, hydrogen purification and resend of the carrier liquid to the point of dispatch. An economic analysis carried out by the European Commission indicates that the costs of releasing the hydrogen contained in the carrier represents more than two thirds of the total transport cost[11].

It is now fair to consider which hydrogen storage-transport technology makes sense depending on logistical aspects. Take the advantages and disadvantages earlier enounced and add two more reading keys: distance and transport duration. We can conclude that :

Liquid carriers make sense over very large distances and without time limitation because of the no spontaneous leaks technology. Limitation is about the unloading energy cost.

LOHC technology seems relevant firstly on niche markets as for example transport over long time and distances. This kind of scenario can in particular be considered in large hydrogen import contracts. Germany has just announced its agreement to import large hydrogen quantities from Australia. The port distance from Perth to Hamburg of over 20,000 km and the 30-day journey make cryogenic transport unimaginable and carrier transport appropriate[12].

At Infinergia, we have strong skills in hydrogen energy technologies and the analysis of its application markets. We are a consulting firm specialized in the adoption of innovation in sustainable energy field.  In particular, we can help in qualifying or quantifying target markets, defining market priorities (by segment or by country) and also provide  support for market entry or business development. Do not hesitate to contact us via our website.